Was really sceptic about how this will turn out to be, since Chetan’s earier attempt to write fiction (which is not his personal experience) in ‘three mistakes of my life’ and ‘one night at call centre’ didn’t live up to its expectation. However other two, five point someone and 2 states, had parts from his own life, so they were mesmerizing.

So, as an ardent fan, I gifted a dozen copies during the diwali season to my loved ones. Everyone was thrilled and completed the book. My copy was still lying idle, finally got some time during holiday season to have my eyes soaked in it. 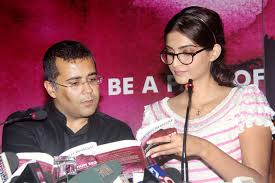 How did it fair?
Bang on!  It delivered the promise between an author and a reader – You give me your time & money, I will give you experience and entertainment.

‘Don’t Read My Books with a Red Pen in Your Hand’.

So being an story writer myself,  instead I read the book with pencil  because I knew there will be few dozen things to learn from the book.

I’ll skip the synopsis about protagonist Gopal, the lady in the love triangle Aarti and the other rocksolid guy Raghav.

Coming straight to the point – it’s a love triangle – it had close resemblances to ‘Kabhi haan, Kabhi naa’ and ‘Hazaar Khwaishen aisi’.

The first thing –  Revolution 2020 is an in-apt title, he could have done better.

Now I could write a detailed review on the story structure, characterization, plot and dialogues, but since it’s a busy week at office, let me give you only important bits.

So, let me first talk about what went wrong. Most of my buddies agreed that Gopal should have gone ahead with Aarti, by promising to change himself and the entire education scene. After all, she was the only reason for his existence. But, when I stepped in to a writer’s shoes I realized that it was required, probably the way it was delivered should have been altered. During Gopal’s realization on page 266 and 267, there should have been a more compelling event or a pay-off (which was set-up’d earlier) because this was the most important point in the book.

One second-last thing that I thought was missing is, how intense Raghav’s love was for Aarti? There was not a single incident, which said if Raghav was equally in love with her? (and not just to lust her).

Last bit, all the earlier books had a solid humor, this book lacked it. To tell you the fact, five point someone was the first book in my life, that made me laugh out loud till my stomach hurt.

The teacher walked along the aisles. Students shrank in their seas as she passed them.

A sweeper with a giant broom produced dust clouds in the air in an attempt to clean the place.

She could never understand that losers, even if they do not have a brain, have a heart.

How can god give girls so much power? How can they turn productive, busy and ambitious men into a wilting mass of uselessness.

He also described Varanasi pretty well. Out an out it deserves 4.5 out of 5 in the Genre of Indian Fiction.

Lastly I can say,

The storyteller has arrived.